For a better experience on ecay Online,  update your browser.
Home > Weather > Be Prepared > Hurricanes: The Dangers of Storms 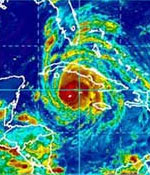 Hurricanes: The Dangers of Storms

When most people think of hurricanes, they conjure up pictures of the wind. They can also envision the heavy rain, which can cause streets, yards, and in some cases insides of buildings to flood.What many people do not think of, especially if they are not from the Caribbean or have never experienced a hurricane before, are the dangers of the sea: the high, crashing waves and rising sea level (storm surge) that cause sea water to come inland and combine with the rain to produce sudden, severe, even life-threatening flooding.

The destructive force of tropical storms and hurricanes comes from four areas:

A storm surge is a rise in the level of the sea. It occurs as storm winds push water forward. As the storm nears land, the water builds up to several feet above normal sea level. The shallower the sea normally is around the land, the higher the storm surge tends to be. The flatter it is on land, the further inland the water will come. Add to this the waves, which ride on top of the already high seas. These waves, themselves several feet high, can crash hundreds of yards inland in a severe storm, battering structures by their own force and the force of rocks and other objects in them. These often destroy and pull out to sea everything in their path, including structures tens of feet above normal sea level.

Because the Cayman Islands are low-lying (particularly Grand Cayman and Little Cayman), small and narrow, they are vulnerable to storm surge and to dangerous wave action. The depth of the ocean around the islands tends to lessen the height of storm surges. However, on Grand Cayman, the North Sound is a large area of shallow sea which can allow storm surges to build up and spread inland in severe storms. The many man-made canals in developments around the North Sound are channels through which water can come even further inland. The reefs and mangroves surrounding each island absorb some of the force of crashing waves. Areas in which they have been removed are highly vulnerable. In any case, severe flooding from rain, waves and/or surges can affect any area of the islands, depending on the strength of the particular storm, the path it is travelling, and how close its centre comes to land. Structures on or near the waterfront are always the most vulnerable (all coastal and canal-front areas, including land bordering the North Sound). So are the narrowest sections of land: Little Cayman; the western end of Cayman Brac; and, on Grand Cayman, Prospect to West Bay. It is important to know, however that any structure, anywhere in the islands that is not built or reinforced to hurricane-resistance standards is at risk.

What to Expect From Different Storm Categories

Storm experts classify storms by their wind speed and have come up with the chart below to show the type of damage that different storms can produce.
It is important to know, however, that every system is different and behaves in its own way. The factors that determine how much damage a cyclone causes include:

The amount of damage received also depends on how well individuals and the country as a whole have prepared.

What to Expect From a Storm or Hurricane

Storms are classified according to their wind speed. Each system behaves in it's own peculiar way, but you can generally expect the damage listed below, for each type of storm.

Damage: Extreme - Shrubs, trees and all signs blown down. Extensive damage to roofs windows and doors. Complete failure of roofs on many small residences. Major flood damage to lower floors of structures near coast due to flooding, beach erosion, waves and floating debris.

Damage: Catastrophic - Shrubs, large trees and all signs blown down, with great damage to windows and doors. Some buildings completely destroyed. Major damage to lower floors of all structures less than 15 feet above sea level or within 50 yards of shore.

What to do at the start of the Hurricane Season

Learn all you can about hurricanes, how they can effect Cayman and how to prepare. Learn about your area. Knowing how high above sea level it is, and its flooding history will give you an idea of how safe your area is. But remember: new buildings, roads and other construction could make flooding more likely even if it was not a problem in the past. You can find out the elevation of your area from the Lands and Survey Department at 949-7900. In-land areas which have had serious flooding in past storms include the West Bay Peninsula, Red Bay, Prospect, Savannah, central George Town, areas around the North Sound, low lying areas of Cayman Brac, and Little Cayman. Learn the location of official public shelters and emergency medical centres – note the closest ones to you.